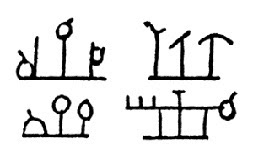 Which way did they go?

ANDI L:  Well, I suppose they had to be heading west.

Vang: They came from North ,the East, the South, so they must have been going west.

Myron: If they came from the North, the East, and the South, they must have gone west.

This was the stanza that enabled me to determine that Rafinesque had altered the English and the LENAPE words to change “west” to “east” in previous stanzas.  Rafinesque believed the LENAPE came over the Bering Strait.  He thought the directions were wrong, so he “doctored” the original words.
.
Who were the "best" men?

ANDI L:  The “best” men could have included bishops or reverends, since “rich men” and “headmen” were mentioned separately.
.

Vang: The leaders.
.
Myron: They were probably the religious leaders.
.
Why did the historian mention "Those with dogs?"
.
ANDI L:  As with “best men,” the groups are mentioned separately, so perhaps “those with dogs” had no families, or oversaw the animals?
.
Vang: Maybe to tell that it was everybody.
.

Myron: The historian may have been saying that
“EVERYBODY CAME, even those with only dogs.
Some men's daughter's served as wives, but those families were considered of lower status than men with wives. 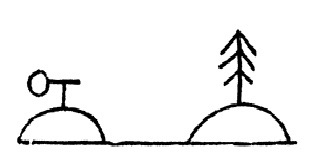 They all come.
The Lenape tarry
[where there was an  abundance
of rivers.]
Those from
the east
Some with hesitation, esteeming highly
their old home at the [mound] land
.
What does the circle on the “T” represent?
.

Vang: Could mean people with out a religion.

Myron: The circle may mean people, who had no religious belief.  Some people believe Christ died on a Tau cross.  The pictograph element may mean that the people left behind died without benefits of religion.
.
What might be the “evergreen” symbol?
.
Vang: Could be the river was connected.
.
Myron: I originally thought that the Lenape historians were envisioning how a high flying goose might see James Bay and the three major rivers from the southeast and three major rivers from the southwest flowing into James Bay.

The difficult paradigm to consider is image that the historian was trying to understand what a goose was seeing and also believing that the image would be recognized by people in future generations.

NEW DATA:
Stuart Harris has "come out of the woods" to inform me that EVERY symbol in this pictograph was part of a symbol set being used in 14th century Europe.
The six major rivers into James Bay and the sketches in the sand still remain, but the selection of the "evergreen" synbol becomes easier to envision.
.
However the Lenape Historians thought, the original syllables
"Shin Ka ing" mean "Rivers" "Many" "Place."
.
Where is the “abundance of .
Vang: James Bay, Canada.
.
Myron: James Bay, Canada.
Besides the six major rivers, fifteen (15) other small streams flow into James Bay.
One stream has the delightful name of "Ek Wann," which means "No Water."

Myron: I see six blue dots and five red dots, but two of the blue dots appear to be so close that another observer may have thought the two shelters were in one location.  According to the VIKING VISITORS video, each longhouse had space for up to 10 fires.  Perhaps a fire could warm ten people.

So, I think there were five sets of shelters, which might hold 100 people.  That would be space for about 500 people.

Vang: There have been 11 heaters/fires, mean11 families so around 50-60 people.
.Myron: If four churches with 250 people per church needed shelter and if the people from all four churches arrived at once, then the fight for shelter space might been more hazardous than the walk on the ice.
. So, maybe, the LENAPE arranged to arrive as groups of two churches with the groups timed to arrive at least a week apart.
.
RE:  Thomas E. Lee and Patricia Sutherland.
Did you take a close look at these two people, who are antropolgists?
.
Can you discern, just by looking at
them, a possible reason why:
Lee was driven out of the Canadian
Archaeological Society and
Sutherlan was fired from the
Civilization of Man?

ANDI L:  I do not know who ousted them, and was not there when it occurred, so I am not qualified to speculate. I do think it was unfortunate, though, because in the video provided, they appear to be very dedicated, learned professionals, who made remarkable discoveries.


Vang: They tell a difference story?

I think Thomas and Patricia might  have been recognized as Aboriginals.  The paradigm carried by the English invaders is, often, “What do Aboriginals know?”  For two centuries the English answer appears to have been  "Nothing to tell the public about."

How would your mental model of ancient North America have changed
if you had seen the Video?

ANDI L:  It would have most likely changed what I “thought” I knew, because it is entirely different from what I was taught as a school-aged child.

Vang: Would not be changed, it is expected. There most be so much out there to discover.

.
Myron: My paradigm certainly changed when I first saw the VIKING VISITORS VIDEO four years AFTER I wrote the FROZEN TRAIL BOOKS.

.
. Then I kew, for sure,  that SOMEONE or  SOMETHING was suppressing early North American history.
.
. The search for the SOMEONE quickly settled on/ the 17th century English Protestants.  The list of charges against those 17th Century English is too long to list here.  They killed, raped, destroyed and suppressed the knowledge of Catholics, who spoke Norse, from the printing presses.


.
. The SOMETHING took me longer.  I am not completely sure yet, but I believe the process could be called "suppression by the perseverance of a false paradigm in every body's head.
.
. Let me cite a serendipitous series of events that happened this past two weeks [in 2017]:
. Larry and Frode are well educated about Norse in America.  Frode helped to edit the Frozen Trail Books.  Larry is a critic of the LENAPE history.
.
. We all were taught the false NEW WORLD MYTH.  Historians use the NEW WORLD MYTH to enable them to omit the Hanno Stone, the Viking sword, the Spirit Pond Stones, and the Smithville Runestone from history curriculums.
.
Any one of those items may be omitted from history because, VERY OBVIOUSLY, they do not fit into the NEW WORLD MYTH.
.
Yet, nearly nobody questions the validity of the NEW WORLD MYTH because that MYTH was taught to us by many authorities with no teacher citing a different opinion.
.
With out opposing opinions the MYTH
perseveres in every body's head.
.
The NEW WORLD MYTH was taught to us many times. The evidence that shows the MYTH to be false has been suppressed by omission many times.
.


The English wanted you to think that way.  That process is called "resetting history,"  Do not be surprised that the  English Protestant government in Canada recently tried to "reset history" to 1812.  The tendency to suppress by omission apparently runs in the culture.
.
So, four artifacts, which should indicate that the NEW WORLD MYTH is false are suppressed from most peoples' memory by the perseverance of the false paradigm in every body's head.

.
Larry chose to introduce the Smithsonian article about the disappearance of Norse from Greenland as a means to inform you, my students, that I was teaching a false story about the LENAPE, who were Catholics, who spoke Norse.
.
He may have been more eager to discredit the LENAPE HISTORY than to get the known facts fitting into a better history.
.
I can understand Larry.  There are many like him, who do not seem to know that they have the NEW WORLD MYTH lodged in their head.
.
But Larry and Frode made me stop to think.  Eight (8) years after Frode and I published "Walking to Merica," Frode and Larry both wrote that they like the  Smithsonian and, because they consider the magazine to be authoritive, they do not know where the people of Greenland went.
.
This week we have been studying about the people from Greenland who walked to MERICA. We have read where they were when the LENAPE Historians started their  history.
So, Larry's and Frode's belief that they do not know where the people of Greenland went is more evidence that topic about the Catholics, who spoke Norse is suppressed by the perserverence of a false paradigm in every body's head.
.
There are only a few of us trying to write about the ancient LENAPE=NORSE history.
.
Now I realize that the "woods" are thicker and the path is much more difficult than I thought.
.
If any of you have thoughts about how to overcome suppression by omission and suppression by the perserverence of false paradigms in every body's head, I would like to read them.
.
What ever the “official” explanation, Thomas and Patricia may have been “set aside” because they were not part of the invading culture.
.
Bridgett Wallace, who looks more like the invaders, escaped from the VIKING VISITORS video with a promotion.
.
For your information the VIKING VISITORS to NORTH AMERICA was “put in the can” for thirty-one (31) years before someone slipped a copy to Norway TV.  Norway TV divided the video into two partss to escape copyright laws.
.
So useful knowledge agreed upon by twenty-seven  (27) of the leading Norse in America researchers was Suppressed for THIRTY ONE years!
.


My kids went through school during that time.  They watched a lot of videos about ancient battles in Europe.  But not about VIKING VISITORS to NORTH AMERICA.


.
IDA JANE and myself wrote books about Norse in America.  "We was ROBBED" of the valuable knowledge.
.
WHY?
.
.

I would appreciate your comments.  Are Miami (Ohio) and Miami (Florida) representing different cultures or the same culture at different times and places?

ANDI L:  It could be the same peoples, but at different times and places. Think of where the water flowed or froze, and follow it.

Myron: I believe they are different places named by people of the same culture at different times.

.
But I have “peeked ahead” in the LENAPE history.  The stanzas to come in the next few weeks are a better place to discuss how the LENAPE might have named MIAMI. OHIO. and MIAMI, FLORIDA.

Meanwhile look at this page ANAV1013: 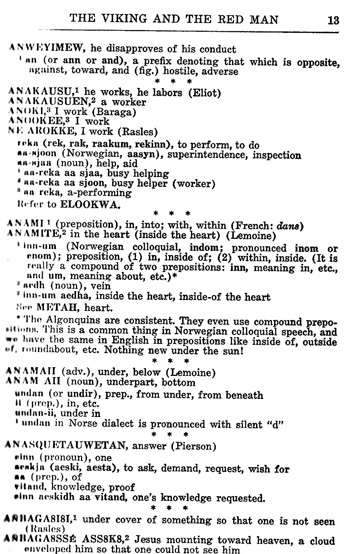 Then look more closely at ANAMI, which I have copied out of the page.

means “in the heart.”
As languages evole the “TE” sound at the end of the word may be heard less and less, leaving a word sounding like “ANAMI”
“AN” is a preposition, which means “in.”
If “AN” were replaced by a possessive pronoun, “MI,” which means “MY” the word “MIAMI” might mean “MY Heart.”

ANDI L: Interesting how you said Payne Lake aided the Lenape by providing more miles of “Wonderful, Slippery Water,” when here you, Myron Paine, may be providing the virtual “wonderful, slippery water” that helps this part of their journey walk into school history books.
.