The man, who ruled in that old,
northern land
that they all left,
was baptized
to be pure.
.
What does the mound represent?
.

Joe: Either Turtle Island AKA America. Or a ceremonial earth mound, which makes alot of sense too, because that is certainly where the "Priest" would invoke the Trinity.
.
Myron: GREENLAND, the land left behind.
.
"Turtle" appears to be a mistranslation by the Monrovians in 1831.  I looked for weeks trying to find a major turtle population in Greenland.  Then Reider T. Sherwin's LENAPE words implied that the Monrovians recorded sounds better than they could translate.
.
What are the horizontal lines with vertical ends?
.
.

Joe: Either a ceremonial platform, such as the Nordic Law-speakers used, or "the chair of Authority" AKA Bishops chair.
.
Myron: Nordic rowers had a bench without handles.  They sat in place and rowed for four hours at a time.
.
The Captain’s chair had handles.  The Captain could move his chair around the boat to find the best spot for comfort or observation.  The pictograph showing the captain’s chair implies 1) the man, who made the drawing knew about Norse boats and 2) a man sitting in the captain’s chair was the ultimate authority.
.
How do we know the man was a Roman Catholic Bishop?
.
Joe: I do not know how we know that for certain - other than the recorded history of Henricus having been here and maybe the straight line down the middle of his body.
.
Myron: By the vertical seam representing a Bishop’s robe instead of a belt and, of course, the “Father, Son, and Holy Ghost” hair-do.  Besides those indicators, the man is fat in a region where most people were not.  That may indicate that the Ruler did not get much exercise.

One of the first acts of the English at Jamestown was to equip 300 men with heavy armor, which could deflect longbow arrows.
Those armored men destroyed every village, killed the men and raped all the women they could catch, between Jamestown and the place shown to the south east of RICHMOND, VI

.
At HENRICO stood a ‘’MAGNIFICENT CHURCH,” which the English claimed they built.
.

Who was the ruling priest “in the light?”
.
Joe: I do not know for certain. Maybe Henricus. What I find most interesting is the position of his arms. This is the ancient way of invocation for the Norse. They out stretched their hands to the Heavens, just as the picture. This brings to mind the Vatican saying the Greenlanders had lost their way and had gone like the Vinlanders. To me this picture and evidence says that here in America was probably a Nordic Christianity rather than Catholic. Kind of like the Celtic Church but even better.
.
Myron: The pictograph shows a “Ruling Priest” coming to the coast of a land, which could be America.
.
Could HENRICUS have rowed down the Atlantic Coast to the James River?
.
The voyage would have been possible.  There was a monument further south which blond haired, blue-eyed natives worshipped.  The “meeting place” crosses are another indication of Christian Influence.  The Mother of Jesus figures destroyed by the same 300 men are yet another item lost to school textbooks.
.
My paradigm is that HENRICUS did make it to HENRICO and that he was fully capable of building a Magnificent Church.  He could row and he had made Churches before.

__SPIRIT POND__
. I have moved the TEXT for the Spirit Pond Stones to this Link.
.
When you contact an educator, please use this web site address:
http://myronpaine.blogspot.com/2017/02/spirit-pond-stones-versus-pristine.html
.

WHY do the history curriculums NOT mention HENRICUS, the SPIRIT POND STONES, and the other Nordic navigation aids?
.
Joe: I have to think that we are dealing with more of a conspiracy against the Norse and their Native Descendants, rather than a conspiracy against Catholicism.
.
Myron:  You may be correct. But Catholics, who
spoke Norse are one in the same. Besides the 17th century was the century that the English cut the head off a Catholic King.
.
To be Catholic and Norse in North America was an uneasy situation.  The massacres at Mystic, New York, the Great Swamp, and other places are evidence of that.
.
Joe: Why else would the Vatican remain silent on all of this that they are fully aware of. South America is loaded with Catholicism and yet they have hidden the Northmen there too.
.
Myron:  The Vatican had records of Catholics in North America.  Tores in his book on Columbus in the Arctic quoted some of them.  I have puzzled over this situation too.  A likely senario might have been that pro-active English agents came to the Vatican library and walked out with the records telling about Catholics in America before Columbus.  The few traces could be the crumbs the English Agents missed.
.
We are trying to understand the actions of people in the 17th century but we appear to discount the damage caused by pro-active English agents who performed suppression by omission.
.
I cannot prove that an English Agent removed Vatican records.  But you cannot convince me that there were NO Vatican records, which may have been suppressed by an overt act of omission,
.
Adam de Bremen’s account appears to have been overlooked because he was a minor Churchman in a remote country.  He also told of the DANE (not NORSE) prince and did not write the words “Catholic” or “Norse.”
.
Joe: Anyway, back in those days possession was 9/10 of the law. Whoever claimed it first had the God given right to it. So, they wiped out any earlier claims. Can you explain how it is that this is also a conspiracy against Catholics?
.
Myron: The Catholics, who spoke Norse, were the same people.
.
The King Phillips war in 1675 had more acts of religious warfare than acts of acquiring and holding land.  The book “In the Name of War” describes the actions, on both sides, that were more violent than expected in "normal" warfare.
,
Joe: And can you tell me where to find the 72 markers maps. I know of quite a few, but 72 is a lot more than I know of.

Myron:  I cannot telll you were the 72 markers were found.  The author of the Spirit Pond stones claims to have found them.  I did my own survey and found hundreds of ancient European Artifacts.  I was surprised to be able to separate the Norse artifacts from hundreds of more ancient artifacts. America was not a NEW WORLD.
.
WORD
__LENAPE_
.
Now, you know the syllable “LEN” or ‘”LIN” means "PURE" as in “Baptized to be PURE."
.
How many LENAPE tribes can you find on this map that you can say with some strong belief were “BAPTIZED to be CHRISTIAN?”
.
http://lenape-epic.blogspot.com/2012/01/tribes-evolved-from-norse-christian.html 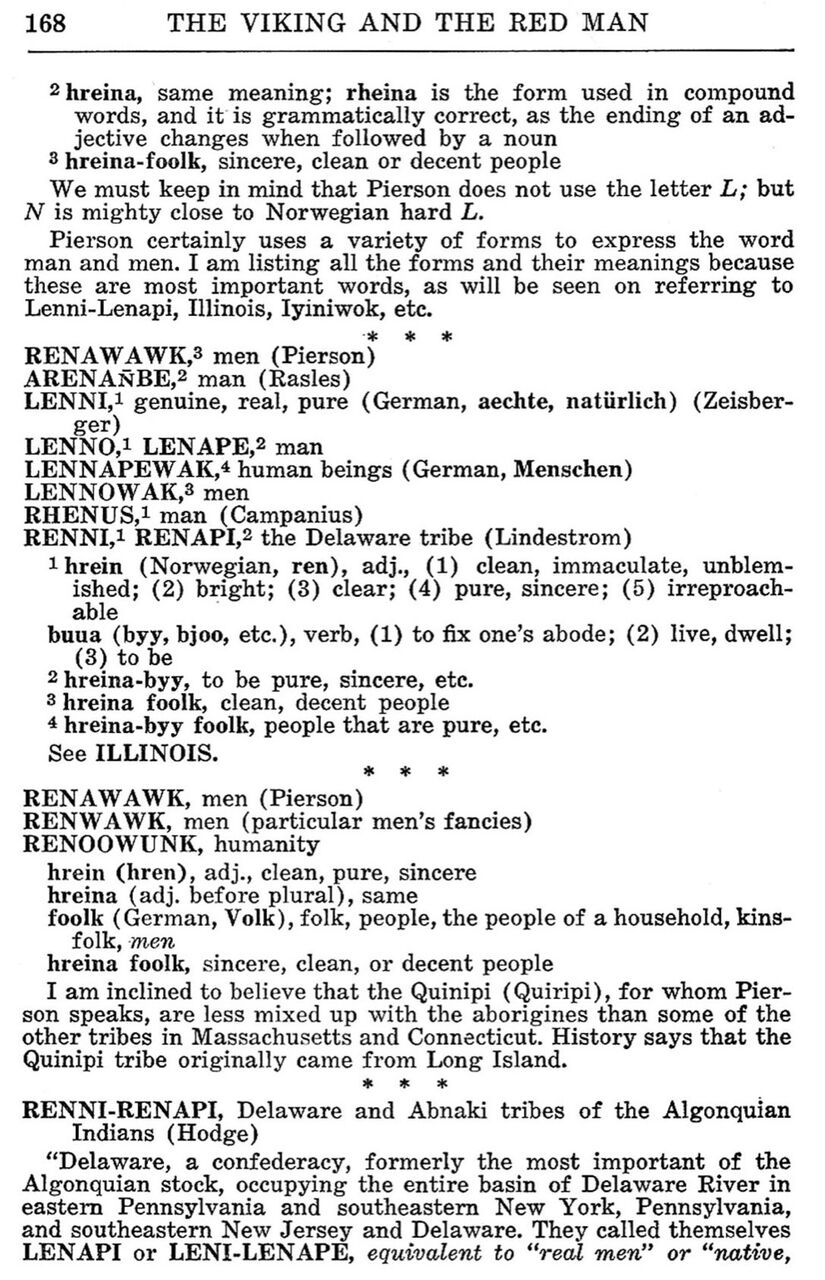 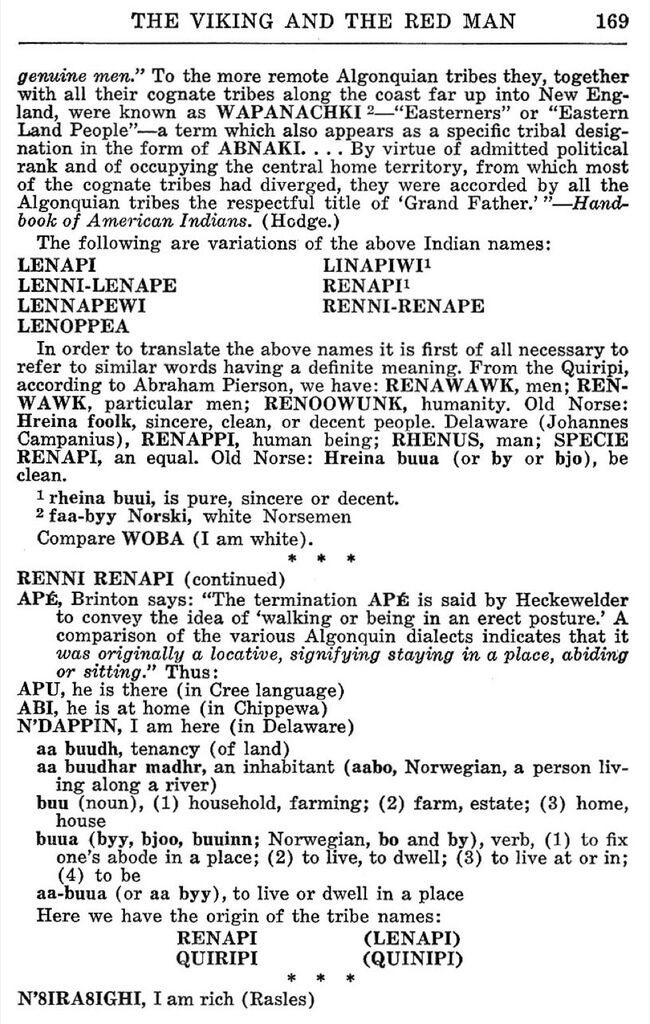 “You swarm of buzzers,
which little bit will you snicker at?
I told you we had a ruling priest
in the light
on the other side.
.
Why were the buzzers snickering?
.
In AD 1831, the LENAPE man, who was saying the LENPAE WORDS and helping to translate them to English, probably knew more English than the Moravian Missionaries knew LENAPE.  The Missionaries knew “mission LEANAPE,” where the people in the mission chose to speak simple LENAPE words in short phrases so the missionaries could understand.
.
But the LENAPE man reciting the stanza’s was hearing the Moravians talk about “snakes” where there were no snakes and “Turtle men” instead of a man “baptized to be PURE.”
.
Under those circumstances I would have had anger too.
.
Who was the ruling priest “in the light?”

.
The Ruling Priest was Bishop Eric Gnuppson, who was nicknamed “Henricus.”  The Iceland, Norway, and Vatican documents all record his departure from Greenland in AD 1121, after he built a Church in Nuuk, Greenland.
.
Why is the boat out of the water?”
.
I call the pictograph a “visual pun.”  The LENAPE sounds for “ABOVE” are nearly the same as the sounds for “IN THE LIGHT.”  Those sounds are needed to make the Stanza self-validating.
.
I think the person, who drew the pictograph, was sending a visual clue to the LENAPE MAN, who would recite the stanza.  The clue was for the LENAPE MAN to use the syllables for “IN THE LIGHT.”
.
Whether the first two lines of this stanza were carefully composed by the LENAPE speaker in AD 1831 or whether the Moravian Missionaries copied the sounds of a man scolding them is not really important.
.
What is important is that the LENAPE people, who later heard these sounds, were alerted to the situation that the stanzas with snakes, turtles, and other strange things in them could not be trusted.
.
So, in the 20th century, LENAPE speakers would say something like, “Yes, these stanzas are in our language, but the translation is poor.”
.
The English, who were forever trying to advocate the NEW WORLD, then swooped in to declare, “The Walam Olum is a hoax.”
.
The Maalan Aarum is NOT a hoax, it is a poor TRANSLATION of LENAPE sounds.
.
Again serendipity came through for the LENAPE history (or was it divine guidance?).
.
The Moravians recorded the LENAPE sounds well.  Sherwin arranged the LENAPE sounds in a Linguistic format that we, non-linguists, can understand and use to decipher the sounds.
.
Then Sherwin linked those sounds to the OLD NORSE phrases that could have evolved into the LENAPE sounds.
.
Then the Drottkvaett format showed us that those Old Norse syllables which were used to compose the stanza were carefully chosen by the stanza maker to be a self-validating set of sounds.
.
In other words, IFwe have the correct translation, in Old Norse, the sounds said by the stanza maker, centuries ago and thousands of miles away, are the same sounds we are hearing today.
.
Then Sherwin gave us the meaning of those Old Norse syllables.
.
The “buzzers” snickering enabled the LENAPE man to warn future LENAPE people that the Maalan Aarum was being translated incorrectly.
.
But the LENAPE man did not realize that the English would be eager to jump onto any apparent weakness so they could proclaim once again,
.
“North America was a NEW WORLD full of PAGANS. There were no Catholics, who spoke Old Norse ther.e.”
.
Most teachers today unknowingly teach the false NEW WORLD.  The Catholics, who spoke Norse concept is suppressed by the perseverance of the false MYTH in everyone's head.
.
Teachers, who repeat the MYTH, but do not question why the NEW WORLD MYTH does not account for 72 navigation aid on the east coast, are suppressing the true history of North America.
.
The TRUE Early America history is still being suppressed by the perseverance of the false new world myth in everyone's head.
.
The 17th century English created the new world myth so they could deny the fact that Catholics, who spoke norse, were standing on the shore when the English invaded.
.
Do you believe the NEW WORLD MYTH?
.
The COUSINS SEPARATED
.
Posted by LENAPE LAND at 10:45 AM