ANSWERS to STANZA 1, IN THE BEGINNING

.
When the waves were calm
in the land they left,
the Lenape lived
together there
in strong hollow houses
with thick roofs.
.
What did “When the
waves were calm” mean?
.
.The phrase may have meant "when times were ordinary" or, maybe, when the waters froze.
. But the LENAPE historian knew that most Lenape in America in the 14th century knew Genesis.

.
Genesis ends with the flood story.

.
Archaeologist know that knowledge, but, for some reason, they chose not to write about the knowledge in school books so kids can learn.
.
Archaeologists
Thomas E. Lee and Patricia Sutherland searched for rectangular stone patterns.  Those patterns, which are found from the Atlantic coast to the Rockies and from Hudson Bay to the Gulf of Mexico, indicate that LENAPE were living there.
.
But Thomas E. Lee was driven out of the Canadian Archaeologist Society.  Patricia Sutherland was fired by the Canadian Government and her collection of artifacts was confiscated.
.
Part of the collection was 30 whetstones.  Archaeologists
know that a whetstone is one of the most positive artifacts that indicates the LENAPE lived there.
.
Those 30 whetstones are probably now forgotten in the bottom drawers of museums though out Canada.  Kids may never see them.
.
.The English Protestant government of Canada does not want us to know LENAPE
were paddling boats throughout the land six centuries before the English invaded.
.
Not many school textbooks tell kids to look for rectangular  patterns or whetstones with iron cores.
.
Writing about them is a "Kiss of Death" to a  professional career,
especially in Canada.

Perhaps the original Slab was created in the Bronze Age
(>2,200-1200 BC) by Ancient Norse travelers, who were using Tifinaq and Ogmi alphabets.

.
(TheTifinag and Ogami alphabets are explained in the BARRY FELL BOOKS.
.
Those books should be required reading in universary curriculims.  Here, for this on-line course, I recommend that you read them --ALL of them!
.
Because I had studied Fell's books, I was able to recognize that the markings on the Shawnee Slab were Tifinaq and Ogami.
.
The major calamities that followed 1,500 BC: a comet storm (1200 BC),
.
Krakatoa’s explosion (535),
.
the Little Ice Age (1300s),
.
and possibly, the Black Plauge (1400s), may have swept away original knowledge of the meaning of the symbols on the Shawnee slab.
.
Then, maybe, a wise shaman may have created another story sometime in the recent past to explain the Shawnee Sacred Slab.
.
Never-the-less, the Tifinag and Ogmi symbols remain to indicate that the Norse were in Ancient America long ago.
.
The Shawnee Slab is evidence that the NEW WORLD
MYTH is not valid.
.
There were people from the east side of the Atlantic, who used crew-paddled boats to America before 1200 BC, and they left behind an artifact that the Shawnee handed down from generation to generation because they believed the slab was sacred.  The symbols were carefully saved as the rest of the slab was rubbed away.

.
The researchers of the American History Organization
required relatively few years to find more evidence that there was:
.
An ancient PAN NORTH ATLANTIC CULTURE, where
SEA PEOPLE
traveled by using
.
CREW-PADDLED BOATS and
.
Spread the SHORE LANGUAGE from the east end of the Mediterranean  to central America.
.
The evidence the SEA PEOPLE left behind is found via links listed in the LENAPE EPIC Table of Contents.
.
The biggest episode of the PAN NORTH ATLANTIC CULTURE was the Copper Hauler era, when a BILLION pounds of copper was transported from Lake Superior to Europe to enable the BROZE AGE.
.
Later generations, including the LENAPE, followed the copper
haulers waterways.
.
The reason why the Shawnee Sacred Slab is NOT in text books is because students, who see the slab would ask embarassing questions about the NEW WORLD
MYTH.
.
Put the link to Shawnee Scred Slab into a book mark.  Use the book mark to remind you that the NEW WORLD is a MYTH.
.
The other things to remember are:
.
·   There was a PAN NORTH  ATLANTIC CULTURE 4000 years ago.
.
·   They used crew-paddled boats.
.
·   They created a common language on the shores from Egypt to middle America.
.
·   They left behind waterways and man modified terrain, which was traveled by millions of people for many generations of descendants.
.
·   The evidence of the SEA PEOPLE lies in plain sight for people, who are not blinded by the NEW WORLD
MYYTH.
.
But, the ".edu" people still teach the NEW WORLD MYTH.
Evidence about the SEA PEOPLE is NOT
found in the books taught to kids.
.
References:
FROZEN TRAIL to MERICA
was published in the spring of 2007 by 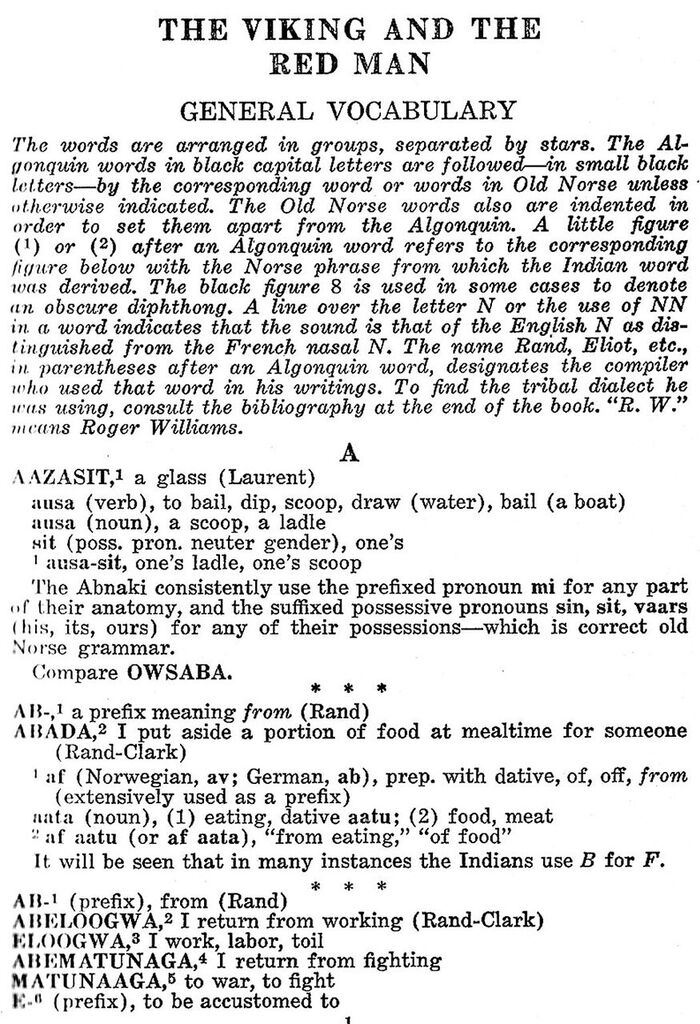 .
You should have found this page.
.
Sherwin's statement, "…the suffixed possessive pronouns, sin, SIT, vaara …for any of their possessions--which is correct old Norse grammar." should tell any linguist--or school kid-- that the 15,000 LENAPE words in the following seven volumes are also Old Norse.
.
So why do the linguist professors NOT suggest that the LENAPE language might be Old Norse?

Maybe those linguists know that Thomas E. Lee was driven from the archaeological society, Patricia Sutherland was fired and the video VIKING VISITORS to NORTH AMERICA had been suppressed for thirty-one (31) years.
.
The evidence is clear.  If a professor mentions "Norse Catholics" were in America before the English invaded," he, or she, has to be willing to give up the professional role they studied so long and hard to earn.

"The past is gone and cannot be changed."
.
"Those, who do not
know the past,
are bound
to repeat it."
.